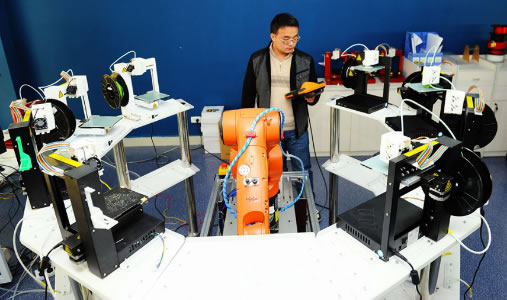 Flex, a smart drone entrepreneur team emerged in recent years, is the first innovative brand to introduce the 3D printing technology into the drone manufacturing process and thus make smart drones to be highly customizable. The Flex drones can realize mobile remote control, real-time transfer of aerial images and various customized demands with 3D printing technology. The product, which is only worth RMB400, enables the 15-member young team to step into the world stage from Guizhou Province and become one of the most successful Asian projects on Kickstarter, the largest crowd funding platform in the world. Depending on the quick printing speed, easy operation, high precision and stability and other advantages, Tiertime assisted Flex in realizing manufacturing by individuals.

Flex’s inception and growth are full of legendary moments. Once waiting for an elevator to go for lunch, the founder Yu Chuan chatted with other persons, hoping a drone could come and deliver their food. Now this transitory moment is realized with the help of 3D printing technology and the continuous efforts of the Flex team. Recently, a video showing this drone was highly praised by the Asia Science and Technology, a science and technology media in America: “the startup hardware companies in China are not plentiful as we expected, but we discovered the coolest model by accident—Flex.”

The “coolest” company only set USD10,000 on Kickstarter as the crowd-funding target, but its pre-sales volume reached USD564,000. Flex also stood out from the 500 startup companies around the world and became the first presentation team from China in the history of the SXSW. In this presentation, Hai Yang, a member of Flex, introduced the secret of success: “we are not a traditional drone manufacturer, and we drive manufacturing process by using full automation.”  The fully automatic manufacturing mainly refers to the use of the desktop printer—UP Plus 2.

Flex was confronted with numerous challenges in the initial product R&D phase. For a startup team, capital and time were the two urgent issues. Flex had to choose the affordable price and high-efficient production mode so as to realize the product innovation thoughts in a short period, rapidly test the market, and lay a foundation for product upgrading. On this point, the traditional moulding technology cannot meet the team demands for the long production period and high costs. While the 3D printing mode selected by Flex can better meet the consumer demand and reduce the threshold of production in the initial stage.

“In fact, our drones have many the competitive products. Flex is the first company to adopt 3D printing technology to make drones, which allows users to get involved in the 3D printing process and change the fly performance. Such mode will become more attractive for users who buy printers with the popularization of 3D printers，” said Yu Chuan, the founder of Flex.

Since drones have extremely high requirement for printing accuracy and stability, Flex team must ensure that the weight and size of each wing printed with 3D technology is the same so that the drone can fly stably. Therefore, Flex chose dozens of types of domestic and foreign 3D printers for test. Finally, Tiertime UP Plus 2 stood out and became the selected model of Flex depending on its rapid prototyping, high stability, accuracy and cost performance.

Yu Chuan concluded three major reasons for the success of Tiertime: “firstly, Tiertime has high printing speed. Tiertime printer takes half an hour or forty minutes to produce a small-sized drone, which significantly improves the efficiency. It is impossible for other printers. Secondly, the actual print quality of Tiertime is much better. Although there is no big difference in the layer thickness index of the existing 3D printers, the vertical smoothness of Tiertime UP printer is much better in the actual printing. Thirdly, the price of Tiertime’s consumables is reasonable. In addition to machinery cost, the price of consumables is another major factor for the cost of printers. The consumables of Tiertime have a very high cost performance.”

In the office of Flex team, the most prominent three-layer annular table is filled with the Tiertime UP Plus 2 3D printers, and the worktable which is smaller than 5m2 is the entire production line of Flex. As long as a product idea is conceived, it can be converted into product with 3D printer in the following day.

“Each engineer has a set of Tiertime 3D printer on the table. Once you have any idea, you can immediately draw a sketch, build a model and print with the 3D printer, which can be truly felt,” said He Chengyun, a member of Flex team.

3D printing technology has transformed the standard assembly-line production in the past into the personalized and small-sized production mode where users are consumers as well as designers, creators and sharers. “With a 3D printer at home, users can freely design the shapes of their exclusive drones by downloading the procedure provided by Flex,” said Liao Jinhua, a member of Flex team.

“With the 3D printing technology, everyone can have their individual workshop or mini factory, which is the biggest difference between the mode of Flex and the traditional production mode as well as the greatest gain of the team in user interaction,” said Yu Chuan, who have infinite longing for the coming of the 3D printing manufacture era of individuals, “it is believed that 3D printer will be as popular as the mobile phone in the near future.”

So far, the maker team from Guiyang has created multiple international records. In addition to the right it won for China to host the 12th Annual Global Digital Manufacture Conference in 2016, it has been delivering the positive energy on the international stage with the successful innovation cases of China.