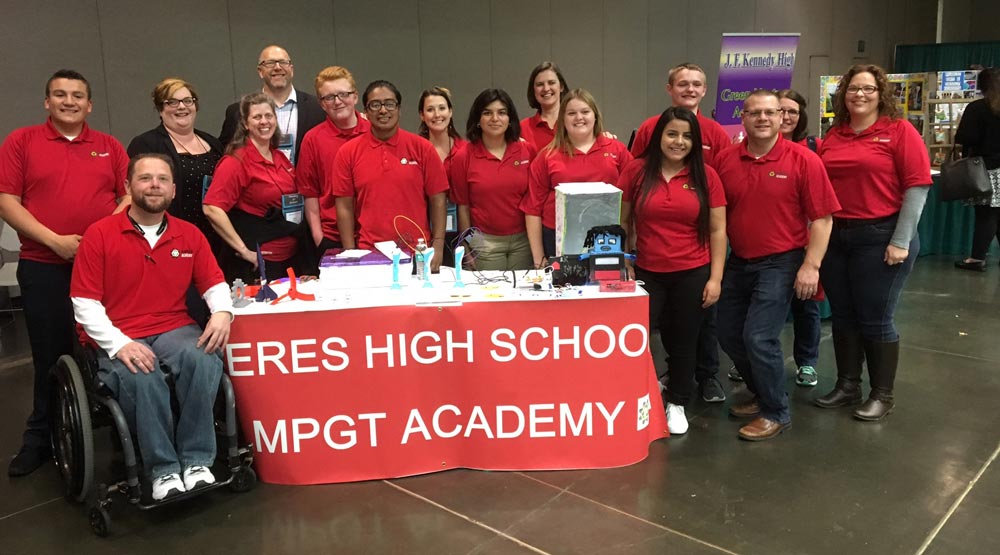 Chris Van Meter is enjoying a distinguished career at Ceres High School in Ceres, California. A military veteran with a physics degree, he is certified to teach math, chemistry, physics, and manufacturing. He is also the driving force behind the school’s Manufacturing, Production and Green Technology (MPGT) Academy.

The Academy is one of 409 California Partnership Academies, a program funded by the state to create cooperation between businesses and schools. Most partnership academies concentrate on other professions like criminal justice, education, agriculture, and health. The MPGT Academy focuses on manufacturing.

In 2016, the CHS MPGT Academy was named one of the seven best academies and it is the only manufacturing academy bearing the recognition. It is also one of just 19 academies designated as a Lighthouse, an example for other academies to follow. In 2017, it was recognized nationally as a co-winner of the Career Pathways Partnership Excellence Award presented by the NCPN (National Career Pathways Network).

Like the school, Van Meter is no stranger to distinction. While serving his country, he was presented with a Purple Heart and two Meritorious Service Medals. As an educator, he was honored as the 2016-2017 Teacher of the Year by California State Senator Anthony Cannella. His classroom has hosted members of the US Congress, state legislators, and state school board officials, all visiting to gain a better understanding of why the Academy is so successful.

In 2010, the CHS MPGT Academy was founded as a result of school administrators acknowledging that high school curriculum had been tailored to prepare students for college, but only one of every three students were continuing their education after graduation. A better way of transitioning students from high

school to the next phase of life was required. The school sought to develop a new approach to teaching based on the needs and advice of local businesses. The Wood Shop class was closed and the roots of a STEM (Science, Technology, Engineering, and Math) curriculum were born.

Many consider the Academy’s methods to be the future of teaching. Non-STEM subjects are still taught, but the school finds ways to tie the subjects together. Students might study an ancient engineering design by someone like Leonardo da Vinci in History class, then write a paper about it in English class. They then take the knowledge to a Manufacturing class where they can attempt to improve the design, create prototypes and eventually produce it. The MPGT Academy has 79 Tiertime 3D printers which play an important role in those final steps.

“I met a gentleman at the San Francisco Palace of Fine Arts demonstrating the Up Mini printer several years ago. I had been looking for a great low-budget printer that was compact and could be put on a classroom table next to a computer,” said Van Meter. “Later, we were introduced to the UP Mini 2 by Octave Systems, a local dealer. The printers were fully enclosed, had a HEPA filter, were Wi-Fi connectable, and had simple-to-use software that students would gravitate to immediately. As far as I am concerned, one of these printers should be in every classroom in America.”

The Tiertime printers are used in grades 9 through 12 for classroom projects, personal projects, design and prototyping concepts, and large-scale efforts such as a drive train for a Solar Regatta Boat.

There is no 3D printing field of study at the MPGT Academy. Rather, SolidWorks CAD software, 3D printers and other CNC machines are the tools employed in teaching modern design and manufacturing techniques. The focus is not on the tools. It is on what the tools enable, which is the preparation of students for life after high school, whether at a university, vocational college or business.

When a 3D printer is not being used for a class assignment, the students are allowed to use them for their own purposes. Van Meter believes this is a critical factor in unleashing creativity.

“This is the brilliant part. After a two-week safety and usage course, students utilize the machines non-stop for various personal projects, other classroom projects – History, Science, English, etc. – and for gifts for other students. This leads to the creativity, imagination, lifetime playfulness, and intrigue that every engineer needs in order to be successful,” said Van Meter. “There are projects all students must accomplish to demonstrate competence. Once completed, I expect the students to freely use any machine they want for a project or just for fun.”

His philosophy is to keep it student-centric, student-led, and student-understandable. Tiertime’s UP mini 2 perfectly fits his doctrine.

“It’s easy to use, simple to set up, and runs flawlessly with few errors. Students can run it non-stop with very little instruction and it is economical for classrooms. It also uses both PLA and ABS which is another big bonus for small classrooms. And honestly, it looks great too,” said Van Meter.

Tiertime UP BOX 3D printers are used for larger projects by 11th and 12th graders delving into robotics, green energy and other designs requiring a bigger build volume. These more advanced studies combine electronics and CNC-machined parts with 3D-printed parts, emulating professional prototyping and manufacturing techniques. From beginning to end, the MPGT curriculum takes a student from not knowing CAD to soldering circuits and programming microcontrollers, while including the perspective of traditional subjects such as Math, Biology, Physics, History, Economics and English.

It doesn’t stop there. Students are taught how to handle a job interview. Most are offered well-paid internships with partnered businesses after graduation. Others go on to study engineering, manufacturing or another science at college.

Perhaps the most important aspect of the CHS MPGT academy is not what is being taught, but instead the way it is being taught. “When I apply hands-on learning techniques in my classes, students explore the boundaries of 3D printing, find the most complex and ingenious solutions, and apply their skills flawlessly in a way I never imagined,” said Van Meter.