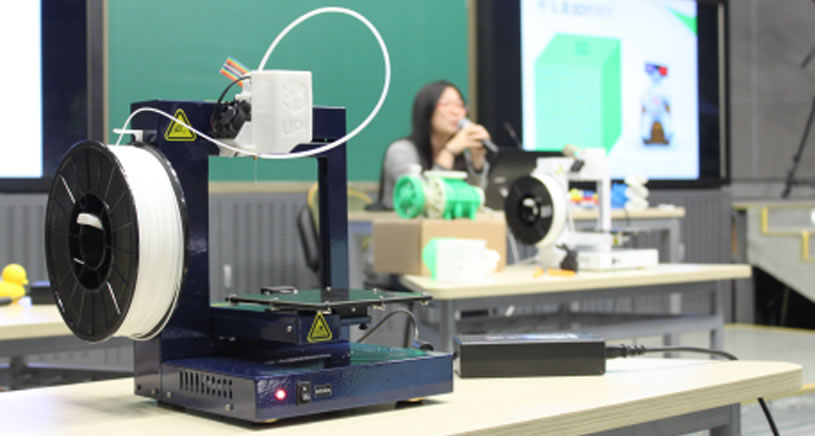 A 3D printing after-school activity organized by technology and science museum of Shijia Primary School was launched yesterday at the school officially. 150 curious students of the fourth-sixth grade and some parents participated the activity.

Teachers from Beijing Tiertime Technology Co., Ltd. (hereinafter referred to as Tiertime) introduced 3D printing technology and displayed application of 3D printing technology in family life with pictures and videos, which was applauded by pupils. With curiosity about new things, children ran to teachers and 12 UP Plus 2 desktop printers of Tiertime. They asked questions and watched the printing.

Shijia Primary School is the first primary school that organizes the 3D printing after-school activity. With the guidance of teachers, students can print their favorite 3D models, cartoon characters, animals, assembly parts, articles for daily use, etc. After knowing how to use printing software and 3D printers, they can turn their imagination into reality through building blocks with the modular 3D design software. Zhang Peihua, curator of the museum, said, “The activity can help students to know, learn and master state-of-the-art technologies and encourag them to explore unknown fields. Innovation cultivation when they are children will be helpful to growth and development in the future.”

At the interaction part of the launch ceremony, some pupils introduced their dreams of using 3D printing technology in an immature manner. Duan Wenxi from Class 5 of the Fourth Grade said that she wants to make artificial limbs with the technology for the disabled, indicating that students have understood what teachers of Tiertime taught and comprehensive quality of students of the school.

3D printers are becoming the standard configuration of teaching practices of various kinds of schools in Europe and the US, while China has just starting introducing the technology into primary school curriculum. Pupils can achieve seamless connection to such courses in middle and high school after learning 3D technology and mastering functions of 3D printers in the labor and technical courses. Students who are interested in 3D printing can form after-school interest groups and apply 3D printing technology into airplane and car mode design and making, which lay firm foundation for them to become hi-end technology talents.

3D printers used by primary schools adopt melted extrusion modeling technology, which extrudes filamentous engineering plastics (ABS) or PLA materials from the sprayer after melting. According to 3D data documents generated with 3D software and the three-dimensional route operated by 3D printing software, it can achieve three-dimensional and real restoration of various 3D models presented in the 3D printing software with layers of stacking (also known as printing). It is magical and interesting for children.

At the activity, Kang Zibo, a consultant of Tiertime, said, “It is one of our goals to pass on technological achievements on which Tiertime has worked hard for over a decade to the next generation of China. It is our obligated social responsibility to support Shijia Primary School to hold the activity. The state leaders and government attach much importance to cultivation of more talents with innovation ability and 3D printing technology promotion in education, and it is also our priority.”