by j45on
Who do you buy filament from for your up! in the UK or europe ?
I have only used the genuine filament so far and I am very happy with it other than the limited range of colors.
I had a disaster of a printrbot before getting the up! and all of the filament I bought for it (from ebay uk sellers) was of very poor quality.
Would realy like some of the colors that afinia sell http://store.afinia.com/Filament_c_12.html

by Marcus
Too bad your Printrbot gave you so much trouble.
I have not printed with other ABS yet either, curious about sources here in Europe as well.
I wonder if the stuff Reprapworld sells (NL but moderate shipping cost and cheap plastics), where I bought my PLA for the Printrbot at, works with the UP?
For now I have some OEM ABS left, and I'll probably stick to the stuff.

by Fred
I was going to get my original filament from Cool Components, but the limited range of colours and expensive shipping made me go for a 6 colour pack from isupply3d.com.

by mr6k
Here in the UK I have used the OEM ABS from cool components, and Non OEM from Robosavy.com marked MakerBot on the reels, which works fine with the UP, although I notice at present Robosavy have few choices. I also bought a reel from CD-writer.com, they also sell on Ebay under the name 3Dprinterworld, their material is quite cheap, maybe cheaper ordered from them than ordering on Ebay! But seems to work OK, maybe a bit smellier than others. Of course this is just in the UK and I have not looked to see what their shipping costs are into Europe.

BTW I did buy some PLA from Faberdashery in the UK but I just don't get on with PLA.

I usually print 0.3mm normal, no raft, onto Kapton tape that is on the original black anodized UP plus plate, occasionally I print 0.2m, fine, where I need more accuracy and time is not an issue. I do not use fast as I find the increase in nozzle temperature tends to pre-melt, at least, the non OEM ABS, and causes mis-feeds. I am running software 1.16, and from comments on this forum do not intend to change unless we get some of the priority wish list items included.

by David Riley
I also bought a couple of reels from cd-writer.com. It was not as white as the OEM and more sticky. But it was fine except for several loop kinks in one reel which destroyed a number of prints and had to be cut out. Their prices have increased considerably since then and I have bought similar reels direct from China much cheaper on eBay.

Just ordered a roll of glow green and a roll of florescent green from cd-writer.com
I will report back once tested.

by art103
I've had 7 or 8 1KG reels from cd-writer.com.
The black and blue ABS were a little "bubbly", however the last few reels that I have received are better sealed to help keep out moisture (one cause of bubbling).
I also find running the plastic cooler helps a lot (either with a fan, or an extruder mod).

Service from them has been excellent IMHO and the price seems good (£23+VAT).

I have not measured the filament yet but to my eye it looks good
The glow is not bad,not brilliantly bright but seems to last quite well (have not printed with it yet).

Noticed my new filament had some tiny black bits,maybe flashing from the spool so I added a lump of foam to remove any debris/dust.

Defiantly need to drop the heat down a bit I will try and find a suitable resistor tomorrow,Its noticeably smelly and bubbly at standard up temperatures.

by j45on
Just found this at 3dprintingsystems.com
"This colour changing filament changes colour from green to yellow at 33c, but wait thats not all! It also glows green in the dark!"
OMG I wonder if they ship to the uk ?

by wackojacko
Yes we do, pop sales@3dprintingsystems.com an email with your order. Did you see the UV color changing material, immediately changes when you walk in the sun.

by j45on
I emailed Bruce
here is his reply
"A division of our company just launched http://www.3dprinterfilaments.com with much better pricing and shipping options to the UK"
Looks like my wallet is going to get lighter very soon

I had a go with the cd-writer glow green today and made some little green men http://www.thingiverse.com/thing:11810
I settled on a 15ohm resistor in the end with a 12ohm there was a little bobbling to the prints.
The temperature could probably go a bit lower as the abs is still a little smelly (compared to up filament)
And it is still popping and bubbling when I press extrude but is printing very well.
All these prints were on fine

Here they are examining their latest clone

Going to test the florescent green tomorrow but the glow green gets a thumbs up from me.

art103/Richard I have sent you a PM,I am interested in one of your up temperature modules.

by Lawrence
Hi j45on
I am in Australia.
Thank you for the information about the new filament site. I only use the genuine Up! filament in my Up! but will soon be purchasing a larger footprint 3D printer to use the lower temperature ABS and PLA, and their filament is very well priced - I will be ordering from them in the future.
I particularly like the look of their Flexible / Rubber-like filament: http://3dprinterfilaments.com/rubber_%20like_filaments
I am also keen to try the nylon filament offered by Jamie at: http://www.3dprintergear.com.au/Taulman ... lon175.htm
Regards
Lawrence

wackojacko wrote:Did you see the UV color changing material, immediately changes when you walk in the sun.

Oh, man, not another cool filament I don't have! Stop it!

by j45on
I have two new colours from cd-writer.com now black and grey.

from left to right grey,black,glow-green and florescent green

Cant wait to try more colours when I have the funds,I would like orange and yellow next.
Looking at the spools and available colours I'm convinced they are the same as octave's even the stickers are very similar.

by Darryn
Ive now had 6 differant reels off CD-Writer.com and im fairly happy.

Ive had in 4x ABS; Blue, Fluorescent Red, Yellow and Purple. And in 2x PLA; Green and Glow-in-the-Dark Blue...

Ive so far had no problems printing with any except for the Glow-in-the-Dark Blue PLA, with what appears to be the feed motor failing to grip the filament and instead cutting a flat on the edge of the filament so it just stops feeding through.

Im going to start looking its mods to help me print with PLA, as the ABS has been perfect and the Green PLA has also worked beautifully, so im thinking this is either a bad batch or im just getting lucky with the Green.

Quality wise it seems as good as the Official Up! filament the printer was supplied with and very good value for money. Ive had 1 instance where the filament was tangled on the spool that caused a failed print, if i get any more kinks/tangled filament ill simply build a spool-2-spool setup to transfer the new filament onto an old spool to ensure there are no snags.

I should mention the Fluorescent Red is Orange, or at least the one I received is, I don't know if they sent the wrong item or not.

by j45on
I now have cd-writer's orange filament
The orange test man was printed at 230ºc using one of art103/Richard's temperature modules http://www.artaylor.co.uk/pp3dp.html
Great bit of kit

Darryn how does the orange compare to your fluorescent red ?
Here is the sticker from my orange spool 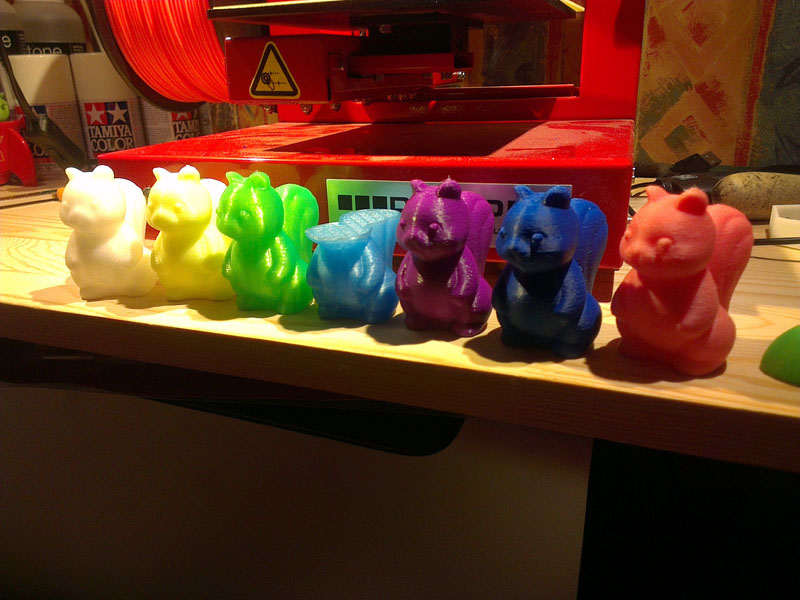 by kitutal
I bought mine from cd-writer.com too, they were doing a half price offer on the glow in the dark ABS at the time. Only trouble is, the 1 kilo reels they sell are too large for the hook on the side of my printer, making things a little tricky with keeping it unrolling as it needs to. Anyone know any ways around this?
I do notice, though, that my blue glow plastic seems almost white, which is slightly disappointing.

kitutal wrote: Only trouble is, the 1 kilo reels they sell are too large for the hook on the side of my printer, making things a little tricky with keeping it unrolling as it needs to. Anyone know any ways around this?.